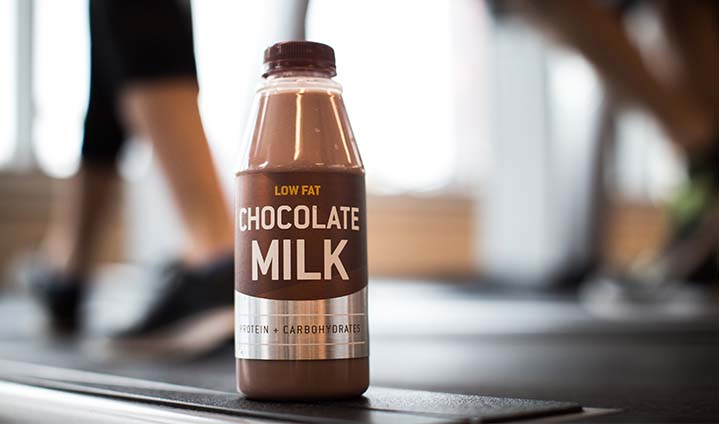 The next time you finish a rigorous workout, you may want to consider a surprising new sports drink to help refuel tired muscles: chocolate milk. A recent study, published in the journal Medicine & Science in Sports & Exercise, reports that athletes who drank chocolate milk after an intense bout of exercise were able to workout longer and with more power during a second workout compared to athletes who drank commercial sports beverages.

The researchers of the study indicate that chocolate milk is a strong alternative to other commercial sports drinks in helping athletes recover from strenuous, energy-depleting exercise. Researcher Joel M. Stager, PhD, professor of kinesiology at Indiana University states that “Chocolate milk contains an optimal carbohydrate to protein ratio, which is critical for helping refuel tired muscles after strenuous exercise and can enable athletes to exercise at a high intensity during subsequent workouts.”

Stager and colleagues had nine cyclists bike until their muscles were depleted of energy, rest four hours, then bike again until exhaustion, three separate times.

During the rest period, the cyclists drank one of three beverages:

Researchers theorize that the combination of carbohydrates and protein found in chocolate milk is what helped enhance the cyclists’ performance and suggest that flavored milk may be an optimal beverage for refueling muscles after exercise. The researchers also note that chocolate milk is a great-tasting and cost-effective alternative to many sports drinks.

In addition to its ideal combination of carbohydrates and protein, flavored milk contains seven other essential nutrients that are important for an athlete’s health – including bone-building calcium. No other sports drink contains the nutrient package found in flavored milk.

This study suggests, as well as many others before it, that a combination of carbohydrate and protein is more beneficial to athletes than just carbohydrate alone in the post-workout meal or supplement. This study takes it one step further by identifying a food product – chocolate milk – that is easy to get, inexpensive, and tastes great.

Confirming these results was a study by Dr. Janet Walberg-Rankin and co-workers at Virginia Tech.
This study compared body composition and muscle function responses to resistance training in males who consumed a carb drink (Gatorade) or chocolate milk following each training session. Chocolate milk consumption immediately after each workout tended to increase lean body mass and bodyweight compared to supplementation with carbs. This study clearly shows that carbs-only post-exercise beverages don’t cut it.

However, if you’re not a fan of chocolate milk post-workout then you can opt for a sports drink with easily absorbable proteins such as hydrolysates.

In regards to your post-workout drink, the presence of easily absorbable proteins along with simple carbohydrates seems to be the most effective choice.