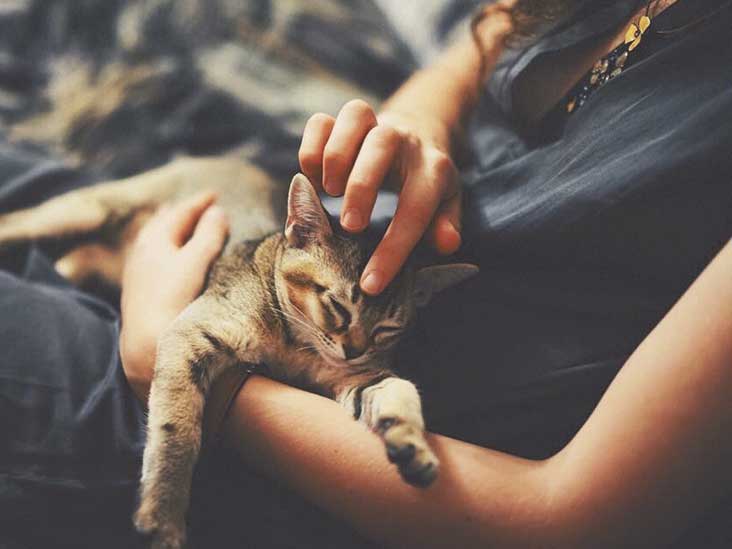 According to a recent report, between six and ten million people (that’s approximately two percent of the population!) in the United States are allergic to cats or exhibit symptoms of cat allergy. However, people often misunderstand these symptoms. Majority believe that cat allergy are caused by allergens from the fur or cat dander (scales of the skin), when, in fact, most of the potent allergens come mainly from saliva and sweat.

A cat’s saliva or sweat contains a protein with a carbohydrate structure called “Fel d 1.” It is an allergen that causes symptoms of cat allergy. “Fel d 1” is much smaller than pollen or mold spores, which are already very potent allergens because of their diminutive size, but because of its much smaller size, “Fel d 1” has even greater potential to cause an allergic reaction. “Fel d 1” can easily bypass nasal passages and lodges deep in the lungs, where it can cause allergic episodes and asthma.

Like pollen and mold spores, “Fel d 1” are airborne allergens. They are often microscopic and float in the air easily. After a cat licks itself while grooming, “Fel d 1” allergen is deposited on its fur and once that happens, the dried specks of saliva can float off and drift around your home. The protein allergen can be found anywhere as aside from being airborne, it attaches itself to walls, windows, and furniture. What is even more amazing is that this allergen can remain in your home for years after a cat leaves your home. So if you want to remove the allergen from your home to protect yourself from cat allergy, everything would have to be totally cleaned.

Like most allergies, cat allergy can affect your eyes, nose, ears, throat, lungs, and skin. The symptoms, especially respiratory reactions, usually occur between fifteen and forty minutes after one is exposed. However, note that pet-related allergies like cat allergy can take days from initial exposure for its onset.

The most common symptoms associated with cat allergy are:

How to Control Cat Allergy

Always the best way to control allergic reactions is avoidance method. However, majority of people with cat allergy often ignore medical advice and continue to keep at least one cat at home even after diagnosis of their condition. We all love our cats and we want to protect them, but you should think about yourself once in a while. Below are some tips to help you control your cat allergy even while keeping a cat home:

If symptoms persist even after following the tips provided above, then perhaps it’s time for you to consult a doctor for his advice on proper medication or immunotherapy.