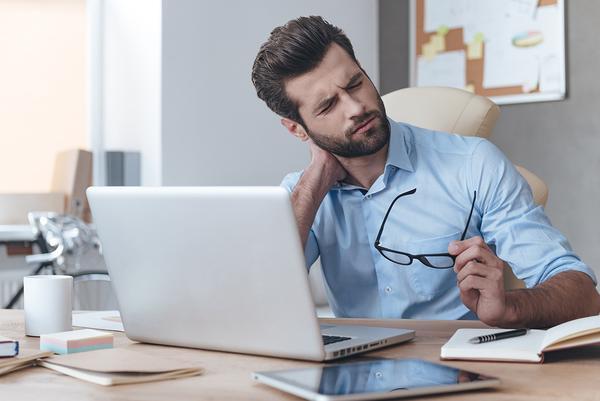 Once upon a time, it was believed that heavy lifting and dirty work would be the main work-related causes for people seeking pain relief. It was once believed that people who worked in offices and the like were at a lower risk of contracting diseases due to their work, as opposed to the ones that worked in the field. Of course, that bit of conventional wisdom is now being tossed out the window. In the modern office’s cubicle-based environments, employees are at just as high a risk of work-related illness as anyone else. According to some studies, they might be even worse off that people working in the field depending on the conditions of the working environment.

The first indication of a problem came from the increasing use of pain relief medication by office workers. This is often attributed to the cramped spaces, repetitive movements, and the lack of proper back support from the average office chair. According to experts, anyone that is forced to sit in the same position for hours on end, with very little room to maneuver or to change posture, is going to experience bouts of discomfort. That discomfort is going to eventually turn into pain, if left unchecked. The increasing amount of office workers taking pain relief medication tend to do so because of back pain, largely due to the lack of chairs with adequate back support.

Cramped cubicle conditions can also be considered a bit of a health hazard. In such cramped situations, all it takes is just one person to get sick with a communicable disease for most of the office to get it. The close quarters conditions also make it difficult for people to move around, which can lead to stress on the body due to repetitive movements and the lack of “leg room.” Pain relief can also be sought because of these problems, especially if the office working areas are poorly designed. Unfortunately, most medical experts believe that the average office is too cramped and is poorly designed, making employees there prone to discomfort and pain.

The very construction of some offices can also put their employees at risk. Centralized climate control is a common feature of most offices, and for the most part, people don’t have problems with them. However, if the centralized system is not properly maintained or cleaned, then it poses a problem. Lack of filtration in the climate control and exhaust system, combined with tight conditions, can result in any number of respiratory problems. Signs of this can include everything from sneezing fits to more serious respiratory conditions. Allergic reactions are also fairly common occurrences, particularly during certain periods of the year.

There are certain things that can be done to help reduce the risk of becoming ill because of office conditions. A little skeletal stretching and exercise to get the blood flowing properly prior to work can help reduce the need for pain relief drugs due to repetitive stress on certain areas of the body. Proper posture and positioning in relation to the keyboard and monitor can also help reduce the stress placed on the limbs, back, and neck. However, there’s very little the average employee can do when faced with the problem of poor office design.