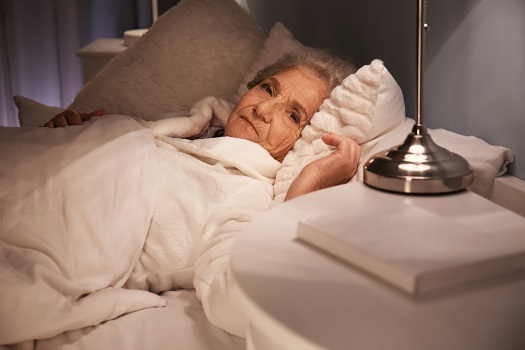 Sleeping Problems in the Elderly

Insomnia is one of the most common sleep disorders in seniors. In fact, up to 48% of older adults have symptoms of insomnia

Sleeping problems in the elderly are more than likely to manifest in a particular pattern, depending on the health of the person, and the prescription drugs they may be taking for their health problems. The quality of their sleep may change considerably, either because of less demands on their energy as a result of retirement, or through illness.

Illness disrupts sleep patters in the elderly, and may result in increased awakenings due to physical discomfort. Urinary urgency, cramps, angina, chronic obstructive airways disease, and left ventricular failure may be some of the many illnesses which cause sleep problems in the elderly.

An elderly person may become very anxious about a change in their sleep pattern, however, it will be necessary to thoroughly investigate the problem in order to ascertain if this perceived sleeping problem, causes dysfunction in their waking activities. If the elderly person has a career, or lives with family then the problem may be easier to assess, for what appears to be a problem may only be a normal change in sleep pattern for the age.

The most frequently occurring sleep problem in the elderly appears to be sleep latency, the person may spend some hours in bed before sleep occurs. This may be perceived by the elderly person to be a problem, and sleeping pills may be sought. Sleep latency is more common in females, and this appears to apply in all age groups, not just to elderly persons, however, it does occur more often in elderly females.

Possibly reduced daytime activity ,combined with daytime naps may contribute to reduced quality of sleep in the elderly. The pressure of a normal working day has been taken away, so the energy output is considerably less, while this may be offered as a possible reason for sleep latency, many others factors may be involved.

There may be much confusion about sleep latency, the difficulty may be exaggerated because the person who experiences it may be convinced that unless they have 8 hours of quality sleep, they will become ill. Sometimes it is difficult to convince an elderly person that they no longer require 8 hours of unbroken sleep, but may be better served by a shorter night time sleep supplemented with day time naps.

Re the old remedy of a glass of milk before bed:

According to Jean Carper, The Food Pharmacy, milk for insomniacs, never!

Milk, particularly low fat milk wakes you up. ” Milk deliver tyrosine to the brain, which in turn triggers production of dopamine and norepinephrine, stimulating you to think more quickly, and accurately”.

So how can sleep problems in the elderly be resolved?

Firstly, a warm comfortable noise free environment, regular exercise, good diet, no heavy meals at night, no eating late at night, relaxation therapies, aromatherapy, herbs like valerian may be taken as a tea, provided that your doctor has been consulted.

Homeopathy is the cheapest, the least invasive, the most gentle, with no side effects, and no interactions with any drugs you may be taking. No homeopathic remedies are recommended here for it is important to consult a qualified homeopath in order to achieve the best outcome for the patient.

Sleep problems in the elderly should be thoroughly investigated before any medications are prescribed.

Unfortunately this is not always the procedure that is adopted, for often a script is written for what has been described as insomnia by the elderly person, however, such is mostly not the case, but rather it’s a normal progression of a resetting of the circadian rhythms which requires education, not medication.

There can be some concerns when the elderly do not get enough sleep. It can increase their risk of falling, make them very weak and impact their overall quality of life. Many elderly already have a problem with their mobility- lack of sleep can greatly impact this as well.

Talk to your doctor to see what options you have- or a naturopath. Sleep well 🙂