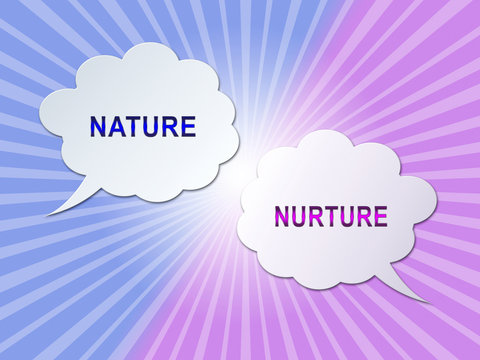 Nature VS Nurture Theories of Personality in 21st Century

Nature vs Nurture theories have wasted a lot of energy of human beings. Plato is considered first to realize that you are made of not only flesh but also an intellectual soul.

The issue may be much older…

In Greek Mythology, when gods created man, they endowed him with divinity. However, the man started challenging them. They feared his potentials and decided to deprive him of the might.

“Where to hide the divinity?” was the big question

They considered heights of icy mountains, limits of shining stars and pits of the earth. But every place was accessible to man’s capabilities.

Then they decided to hide it within the man himself.

Since then the man has been climbing icy mountains. He has navigated deep seas. He has traversed moon. His machines have even touched Mars. But he is still looking for his ‘lost paradise’.

Man, it is inside you!

They call it personality now. It is ‘scientific’ to ask how it comes into being. Is it inheritable? Is it natural? Is it outcome of environment? Have you any will to change your behaviors or you are bound to follow the dictates?

Nature vs Nurture theories focus upon these issues. The new discoveries in genome and quantum physics have revived the debate. Incidentally, more they discover, more they bewilder. The abstraction continues intensifying.

How to Define Nature VS Nurture Theories

There are three distinctive schools of thought.

This group believes that your personality is result of evolutionary process. You inherit behaviors due to complex interaction of genes. They control your behaviors. So you don’t have a free will to act otherwise.

This group argues that you don’t get your personality inherited. Your mind is a blank slate at your birth. It is your environment, education and culture that make up your behaviors. There are differences on the issue of ‘free will’ to change your behaviors.

This group claims that your personality is result of neither nature nor nurture. It is gift of some deity. They are split on the issue of ‘free will’.

Darwin’s theory of evolution led William Hamilton, George Williams and many others to the idea of personality evolution. They proposed that like physical organs, your personality is result of natural selection for survival of the fittest. You do as your genes dictate.

However, there is strong criticism on this approach.

1- There is no single universal behavior which can be proved evolutionary. Even fear of death, that seems natural to all, is overridden in crusades, suicides and suicide bombings.

4- No genome scientist has related genes or a set of genes with any kind of behaviors.

Nature VS Nurture Theories and Physics

The discoveries in physics have always provided new meat to the nature vs nurture theories. The conclusions of Newton and Einstein helped the people to believe that future events can be predicted with the help of true knowledge of matter and natural laws. This led psychologists to suggest that your future behaviors can be predetermined. The whole mechanism of psychometrics follows this hypothesis.

However, quantum physics has changed the situation altogether. Evidence proves that you can’t make two (almost) simultaneous measurements of observables correctly. For example:

1- Position and momentum of a particle

2- Position and direction of a particle

3- Time and frequency of a sound wave

4- Wavelength and magnitude of a sound wave

The quantum physics has shaken determinism. So much so the scientists have to devise “Heisenberg uncertainty principle” which challenges that any physical event can be predicted precisely in time and space.

Do you think that particles are too small to affect big events?

What would happen if Hitler had died in his young age of cancer, which can occur with a slight genetic mutation?

Nature VS Nurture Theories and Reality

“What was the first cause?” Aristotle had asked centuries before

It has been proved that the universe is not result of infinite series of collaborating causes and events. There was a first event; the big bang just 13.7 billions year ago. What was its cause?

There can be only two answers:

1- There was no preceding cause, or

2- There was a first Causer

When you affirm the first statement, you agree that there might be other events which don’t have preceding causes. The birth of personality is one of them.

However, if you agree with the second statement, then you are siding with the spiritual school of thought.

It plays very important role in making of your behaviors. However, any behavior that you acquire is amendable. Secondly, it is not only environment that influences you, the vice versa is also true. You can count hundreds of names who influenced their environments, cultures and societies.

The best advice is to believe in your personality. Use your free will to develop and refine your behaviors. Utilize all out capabilities to collect small successes daily to build bigger one in future. Your way of thinking and style of doing shall determine your destination.

Meanwhile, let the counsels of nature vs nurture theories to continue with their confusing debates.