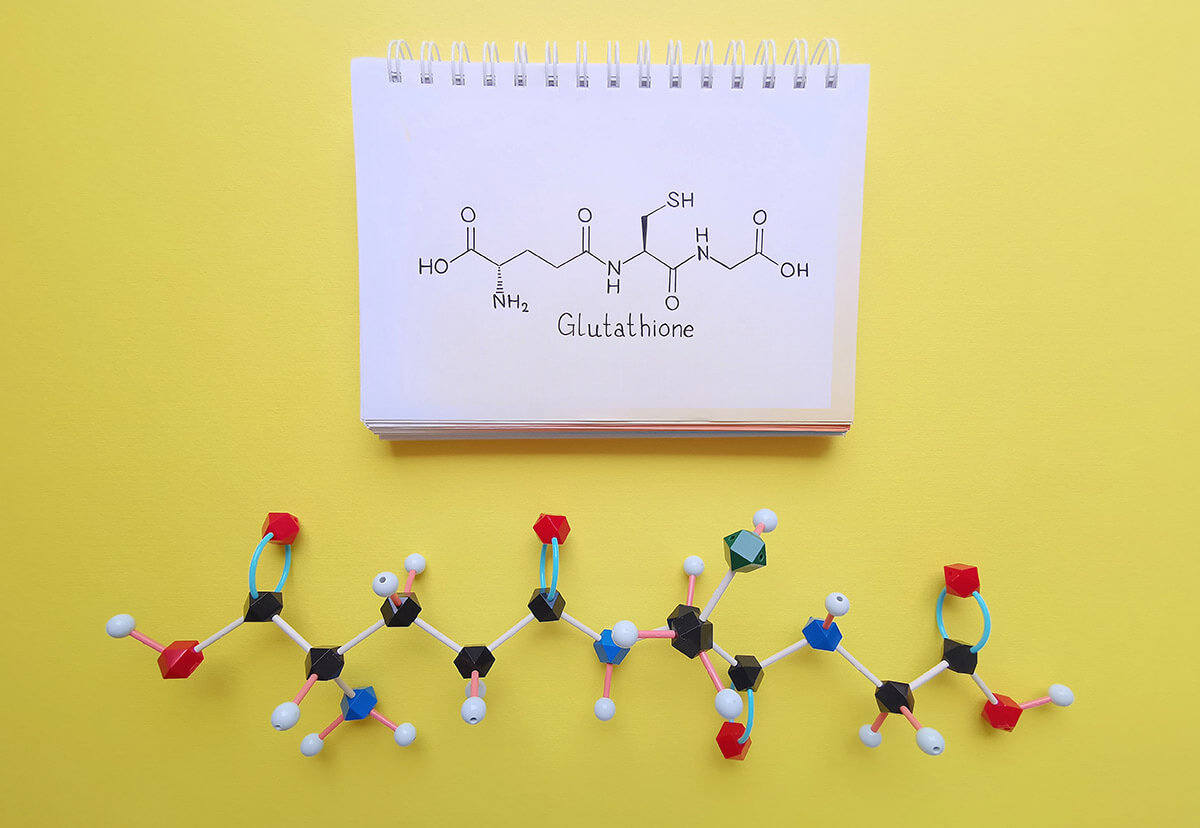 Free radicals and oxyradicals play an important role in the development and progression of many brain disorders such as brain injury, neurodegenerative disease, schizophrenia and Down syndrome.
Glutathione is the brain’s master antioxidant and plays an important protective role in the brain.

According to Dr. Jimmy Gutman, “The brain is particularly susceptible to free radical attack because it generates more oxidative by-products per gram of tissue than any other organ.”

Many neurological and psychiatric disease processes are characterized by… abnormalities in glutathione metabolism and antioxidant defenses.”

Generation of reactive oxygen species (free radicals) and oxidative damage are an important cause of neuron (brain cell) death from brain injury.

On the other hand, over-expression of the glutathione peroxidase (GPX) enzyme potently decreases cell death from brain injury. (2)

Researchers at Children’s Hospital of Pittsburgh have found that males and females respond differently to brain injury. (3)

In animal models, levels of glutathione remain constant in females who have suffered a brain injury, but drop by as much as 80 percent in males with the same injury.

N-acetyl-cysteine (NAC), a precursor of glutathione, already approved for use by the U.S. Food and Drug Administration to treat people who have overdosed on acetaminophen, may be an effective treatment for brain injury in boys whose brains are deprived of oxygen.

Brain Disorders and Glutathione – A Genetic Cause?

Genetics researchers have found that the glutathione S-transferase gene controls the onset of Alzheimer’s, Parkinson’s disease and determines, not if we get these diseases, but when. (4)

The glutathione S-transferase gene has previously been linked to the risk for Parkinson’s disease among people who used pesticides.

Free radicals and oxidative damage in neurons is known to be a primary cause of degenerative diseases like Alzheimer’s disease.

Amyloid-ß peptide (Aß) accumulation in senile plaques, a pathological hallmark of Alzheimer’s disease (AD), has been implicated in neuronal degeneration.

Amyloid plaques encroaching on the brain increase the production of free radicals, or oxidative stress. Antioxidants, such as vitamin C and E “mop up” the damaging free radicals.

Evidence has been piling up over the link between the amount of an amino acid called homocysteine in the blood and the chance of developing Alzheimer’s.

For people not genetically predisposed to developing Alzheimer’s, cholesterol and homocysteine, largely caused by an unhealthy lifestyle, are the core causal factors.

Welsh GP, Andrew McCaddon, showed that the more homocysteine that patients with Alzheimer’s had, the worse their mental performance, and the worse their “cognitive impairment,” the less they had of the antioxidant glutathione. (6)

Studies have found that the mood stabilizing drug, valproate, used to treat epilepsy and bi-polar disorder, regulates expression of the genes that make glutathione-S-transferase (GST).

These findings led researchers to conclude that glutathione S-transferase may be a novel target for mood stabilizing drugs. (7)

Alcohol abuse is known to impair memory and other brain functions and increase brain cell death. A new study in rats has shown that alcohol consumption causes fewer new brain cells to form and results in greater cell death. (8)

But rats that were fed alcohol along with Ebselen – a glutathione peroxidase mimic that acts as a free radical scavenger – showed no similar reduction in brain-cell formation and no increase in cell death.

Taking glutathione itself as a supplement does not boost cellular glutathione levels, since it breaks down in the digestive tract before it reaches the cells.

However, intravenous glutathione therapy and glutathione precursors or dietary supplements are effective in boosting intracellular levels of glutathione.

Glutathione Precursors: In the Alzheimer’s study conducted by Welsh GP, Andrew McCaddon, adding the glutathione precursor, N-acetyl-cysteine (NAC) to a protocol that lowered homocysteine levels by simple supplementation with B12 and folate, resulted in prompt, striking, and sustained clinical improvement in nearly all the patients. (9)

Curcumin (turmeric): Studies have shown that the Indian curry spice, curcumin, has neuroprotective effects because of its ability to induce the enzyme, hemeoxygenase-1 (HO-1), which protects neurons exposed to oxidant stress. Treatment of brain cells called astrocytes, with curcumin, increases expression of HO-1 protein as well as glutathione S-transferase. (10)

Ebselen: Ebselen is a glutathione peroxidase mimic and potent synthetic antioxidant that acts as a neuroprotective agent and an inhibitor of free-radical induced apoptosis (cell death). It can protect brain cells from the neuro-toxic effects of alcohol consumption. (8)

Undenatured Whey Protein: Undenatured whey protein provides glutathione precursors, has been shown to raise intracellular glutathione levels in clinical trials, and has anecdotally been reported to improve the symptoms of Parkinson’s disease.