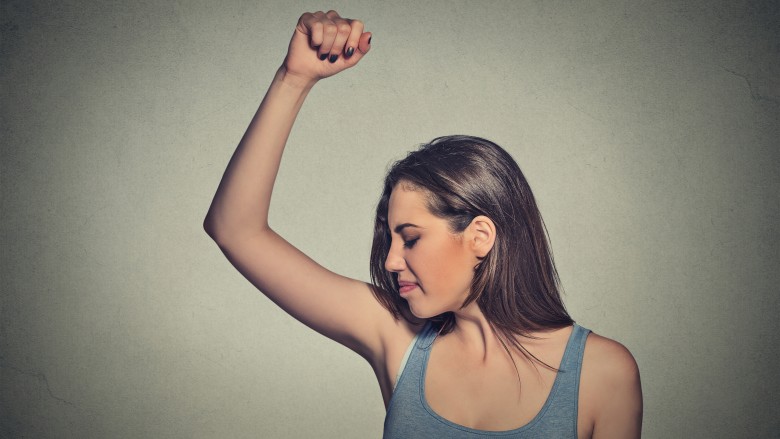 Body Odor and Your Diet

This article touches on a subject that’s quite sensitive to many people: body odor. Let’s explore the link between the foods you choose to consume and the odor produced by your body (there is a direct correlation).

With all the hundreds of millions of dollars spent each year on personal care products and deodorants, I’m amazed there’s almost no discussion about reducing body odor by changing your diet. In fact, when I’ve mentioned this subject to some people, they look at me in bewilderment. They ask questions like “What do you mean? Your foods control your body odor? Body odor is genetic!” What’s needed is a crash course in the underlying causes of body odor. We’ll call it The Fundamentals of Offensive Personal Odors, or just Body Odor 101, for short.

The first lesson in Body Odor 101: What comes out of your body reflects what you put in. Body odor is something that’s strongly affected by what’s being emitted by your sweat glands. And remember, armpits are designed to sweat. I know that may sound insanely simple, because everybody knows that armpits sweat, but I’m saying that armpits are supposed to perspire. Yet people go to great lengths to prevent their armpits from sweating by using deodorant products containing toxic chemicals and derivatives of heavy metals like aluminum.

But there’s more to it than just cooling your body temperature through perspiration. Another function of the sweat glands in your armpits is to excrete toxins from your body. That’s why sweating is an important part of maintaining optimum physical health: you have to give your body a chance to get rid of various toxins through a variety of metabolic processes. Those include urination, passing fecal matter, exhaling carbon dioxide and other toxins through the lungs, and, of course, eliminating toxins through the skin. The skin, remember, is your body’s largest organ.

Your armpits, then, actually have an important health function in getting rid of toxins. That’s why you need to keep them open and unclogged by deodorant products. Sweating is good for you.

But what about the odor? Where does that really come from? Conventional doctors like to say it’s due to bacteria living in your armpits. But that’s ridiculous: our entire bodies are covered with bacteria, not just our armpits. And if the bacteria alone were the cause of the odor, you could eliminate body odor by sterilizing your armpits with rubbing alcohol or iodine tincture. (Try it, if you like: it still won’t eliminate the odor.) The real cause of armpit odor is the intentional excretion of horrible toxins that your body is trying to get rid of. And by using deodorant products, you block the exit door and force those toxins to stay in your system!

The way to eliminate body odor, then, is not to mask it with unhealthful deodorant products, but rather to clean up your body from the inside out. In other words, if your armpits have a horrible raunchy smell, that’s an indication that your diet needs some adjusting. I’m embarrassed to say that I know this from personal experience. My own body odor used to be rather disgusting when I followed the standard American diet like most people do. I had to use massive doses of brand name deodorant products just to try to cover up the odor. Only later did I learn that those products are made with cancer-causing chemical fragrances that are absorbed directly into your bloodstream, through your armpits, where they enter your liver and promote liver disease, cancer, and a variety of other disorders.

Many deodorants and antiperspirants are made with aluminum in order to halt the perspiration of your sweat glands, and this aluminum is suspected of accumulating in the nervous system and ultimately contributing to nervous system disorders such as Alzheimer’s disease. That’s why I no longer use any brand name deodorants or antiperspirants. After giving up red meat, junk foods, fast foods and other dietary atrocities, I no longer needed deodorants anyway.

Let’s take a closer look at the causes of body odor.

What foods really cause body odor in the first place?

Red meat is the number one cause of body odor. Red meat causes stagnation in the body; it putrefies in the digestive tract and releases all sorts of toxins into the bloodstream through the large intestine. I’ve noticed that people who consume a large quantity of red meat on a regular basis tend to have much stronger body odor than those who avoid it. Some people tell me just the opposite — they say it’s vegetarians who stink because they run around wearing no deodorant whatsoever. But my experience is that if a vegetarian stinks, they aren’t following a healthy diet even though they are avoiding meat. (You can be vegetarian and extremely unhealthy if you consume a lot of processed foods.) Overall, though, if you find a healthful vegetarian and put them side by side with a heavy meat eater in a sniff test, I’m confident your nose will lead you to the conclusion that the meat eater is the most offensive of the two.

As far as other foods that cause body odor, manufactured foods — those lacking fiber and made with refined white flour, added sugars, hydrogenated oils and other processed ingredients — are the big culprits. When you eliminate these from your diet and shift to a 100% healthful diet made of whole grains, massive quantities of leafy vegetables, fresh fruits, soy products, supergreens, lots of sprouts, raw nuts and seeds, healthy oils and other similar healthful ingredients, your body odor will all but disappear in a matter of weeks.

That’s because a plant-based diet is an internal deodorizer. It’s true: the chlorophyll and other phytonutrients will cleanse you from the inside out. Some of the best foods for that include parsley, cilantro, celery and all mint species. The aromatic herbs are also excellent: sage, rosemary, thyme, oregano, and so on.

As a sidebar to the body odor discussion, all the things that come out of your body are strong indicators of your current level of health, as well as what adjustments you need to make in order to be healthier. It’s interesting to note that for hundreds of years, physicians actually tasted the urine of their patients and were able to make medical diagnoses by taste analysis alone. As bizarre as this sounds, it actually makes sense. The human tongue is perhaps the finest natural chemical composition sensor known to modern medicine. (Dogs’ noses are also good at this. Dogs have actually been trained to sniff out bladder cancer by smelling the urine of humans. Just search Google for articles on “bladder cancer dogs sniff” and you’ll find lots of references to this fact.)

After tasting the urine, skilled physicians were able to offer astoundingly precise medical diagnoses. The problem, of course, is that doctors also tended to become ill from tasting their patients’ urine, and so this practice fell into disfavor long ago.

Now, I’m not at all suggesting that you should be tasting your own urine. But it is very easy to smell your own armpits and get a sense of what’s going on. Try going 24 hours with no deodorant. If you can’t stand the smell from the outside, just imagine what your body smells like on the inside!