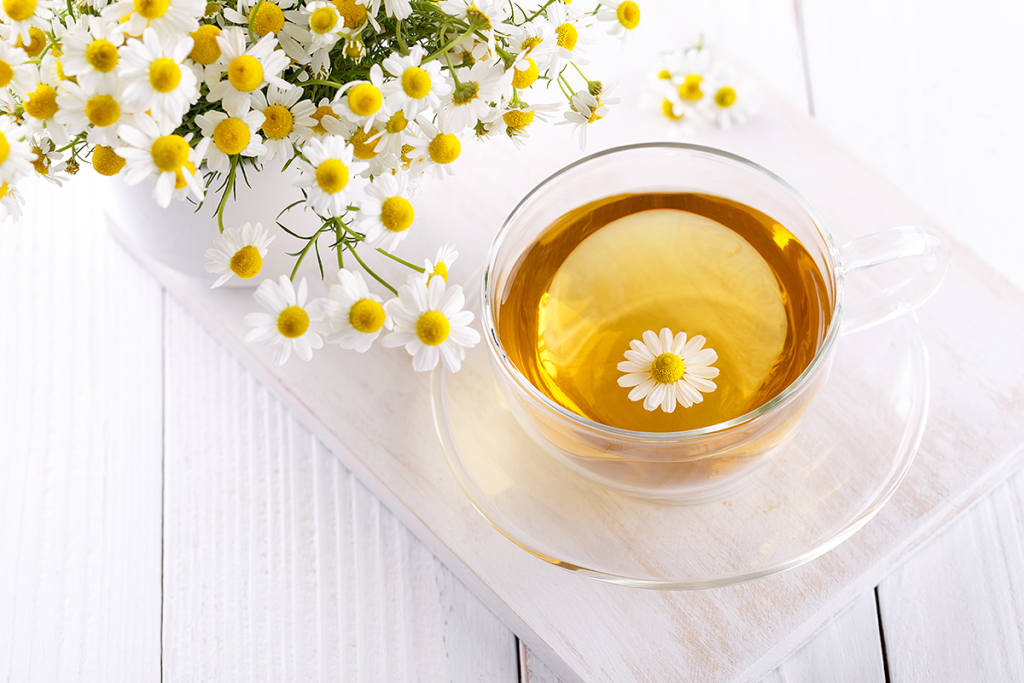 It is probably the most widely consumed herbal tea in the world. Prove to the fact that over one million cups of this kind of herb tea are ingested worldwide each day. Chamomile is the name for various related plants of the family Asteraceae, the aster family. The word chamomile is derived from the Greek word “chamos” meaning ground and “melos” which means apple, which refers to the plant’s low growing habit and the fact that the fresh blooms are somewhat apple-scented.

Chamomile has been used for centuries in teas as a mild, relaxing sleep aid, treatment for fevers, colds, stomach ailments, and as an anti-inflammatory, to name only a few of its therapeutic uses. The plant according to extensive scientific research over the past 20 years has confirmed many of the traditional uses and established pharmacological mechanisms for the plant’s therapeutic activities, including anti-peptic, antispasmodic, antibacterial, anti-fungal, and anti-allergenic activity.

The Chamomile flower has also been hailed as a sacred herb from early on. The nervous system benefits from Chamomile tea through its calming effects. Muscles in the body contract and relax in response to chemical signals delivered through the bloodstream. Muscles that are having difficulty relaxing have a chemical in them that is signaling the muscle to contract.

This herbal muscle relaxer soothes muscles by increasing certain amino acids. With the way humans depend on their muscle function, it is no wonder muscle pain can be a very uncomfortable situation. Some muscle pain sufferers experience manageable pain only causing stiffness and soreness. For others, the pain may be debilitating and cause tenderness and inflamed areas.

Doctors often first recommend applying heat or cold as well as rest and basic stretching. However if that fails to work, an herbal muscle relaxer such as Chamomile is the safest and confident choice.

Although best known as a herbal muscle relaxer, chamomile is also believed to have antiseptic and anti-inflammatory capabilities. The plant’s healing properties come from its daisy-like flowers, which contain volatile oils including bisabolol, bisabolol oxides A and B, and matricin, as well as flavonoids and other therapeutic substances.

Chamomile may be used internally or externally. As a popular remedy, it may be thought of as the European counterpart of ginseng.

Chamomile tea benefits the muscles along the digestive tract, allowing digestion to take place more efficiently. It helps muscles relax in other parts of the body, which helps people who suffer from insomnia fall asleep naturally. Chamomile tea even has the benefit of reducing gas.

Chamomile flowers have also been proven to have anti-inflammatory properties. Cosmetic products such as lotions that are infused with chamomile are used to reduce skin diseases such as eczema and other skin inflammation. It also greatly help repair skin on over-worked and over-exposed hands. The chamomile flower extracts help tone and strengthen delicate ski tissue.

Drinking chamomile tea before bedtime has been followed for centuries on account of its ability to calm the nervous system and soothe gastrointestinal disorders. It’s mild flavor makes chamomile tea a favorite beverage with many.

From the time of the early Egyptians and Greeks until today, Chamomile is still considered as a sacred herb because of its many curative and healing properties.