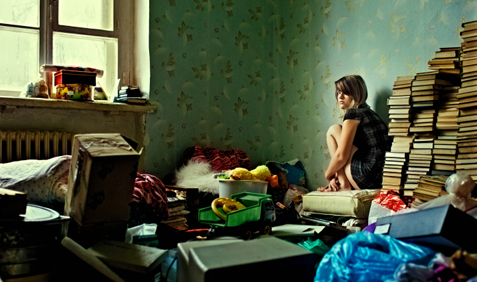 Clutter is a big problem for many people. At a lecture that I gave, I asked for a show of hands regarding how many people had problems with clutter and disorganization. I was surprised to find that at least half the people raised their hands.

One of my clients told me that she was trying to help her sister get back on her feet after her sister had been laid up with an illness and lost her job. Her sister’s house had always been a mess, and had become so filled with clutter that there was no place to walk or sit. My client offered to buy her sister a car if she would clean up her house. She even offered to help her sister clean up the house. She was shocked when her sister refused the offer, even though she desperately needed the car. Her sister was unwilling to get rid of the clutter.

Why? Why was the “stuff” so important to her?

Underneath all addictions lies fear – of emptiness, helplessness, loneliness and aloneness. Addictions are a way to feel safe from feeling these difficult and painful feelings, and an addiction to clutter is no exception. It’s all about having a sense of control over feeling safe. Clutter, like all addictions, provides a momentary feeling of comfort. However, as with any addiction, the clutterer needs more and more clutter to maintain the illusion of safety and comfort.

When my mother died and my son was cleaning out her house, he discovered huge amounts of clutter. While my mother’s house always looked neat and clean, the cupboards and drawers were filled with clutter. My son told me he found 6 broken hair dryers in one cabinet. Why would my mother want to keep six broken hair dryers?

My mother grew up during the depression and always had a fear of not having enough. No matter how much she accumulated materially, she never felt that she had enough. The six hair dryers made her feel safe from her fear, even if they didn’t work.

Carrie has trouble throwing things away, especially magazines with “important’ information in them. She subscribes to many magazines but, being the mother of three small children, doesn’t often have the time to read them. So the magazines pile up and pile up. Carrie hopes at some point to have the time to read them, but that time never seems to come. When asked why she won’t throw them out, her answer is, “Because there might be something important in them and I don’t want to miss it.” Carrie fears missing out on some important piece of information – information that may give her the peace she is seeking. It makes her feel safer and in control to have all the magazines around her with their important information, even if she never gets to read them.

When we don’t feel safe on the inner level, then we try to make ourselves feel safe on the outer level, and clutter is one way of doing that. Whether it’s things, such as hair dryers, or information, such as in magazines and newspapers, clutterers do not trust that they will have what they need. In addition, clutterers may be resistant people who see messiness and clutter as a way of not being controlled by someone who wants them to be neat.

Healing The Addiction To Clutter

Clutter is created and maintained by a wounded, frightened part of oneself, the wounded self – the part that operates from the illusion of having control over people, events, and outcomes. As long as this wounded self is in charge of the decisions, the clutterer will continue to accumulate clutter as a way to provide comfort and the illusion of control over feeling safe, or continue to be messy as a way to resist being controlled.

Healing occurs when the individual does the inner work necessary to develop a strong, loving adult self. A loving adult is the aspect of us that opens to and connects with a spiritual source of wisdom, strength, and love. A loving adult is capable of taking loving action in our own behalf. The loving adult operates from truth rather than from the false beliefs of the wounded self, and knows that the comfort and safety that clutter seems to provide is an illusion – that no matter how much clutter accumulates, the clutterer still feels afraid. The loving Adult knows that safety and integrity do not lie in resistance. Only a loving adult who is tuned in to the guidance provided by a spiritual source and capable of taking loving action in one’s own behalf can create a sense of inner safety.

Practicing the six steps of Inner Bonding that we teach develops this powerful loving adult.