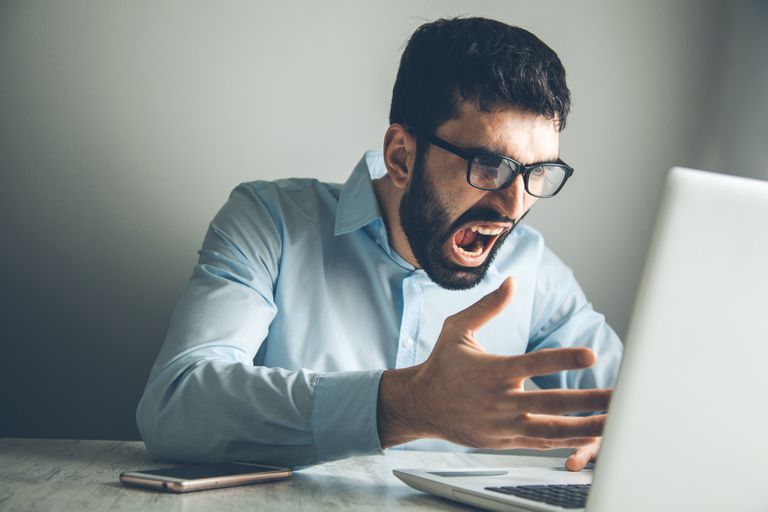 The effects of anger on health have more to do with duration than frequency and intensity. The normal experience of overt anger lasts only a few minutes. But the subtle forms of anger, such as resentment, impatience, irritability, grouchiness, etc., can go on for hours and days at a time. Consistent, prolonged levels of anger give a person a five times greater chance of dying before age 50. Anger elevates blood pressure, increases threat of stroke, heart disease, cancer, depression, anxiety disorders, and, in general, depresses the immune system (angry people have lots of little aches and pains or get a lot of colds and bouts of flu or headaches or upset stomachs). To make matters worse, angry people tend to seek relief from the ill-moods caused by anger through other health-endangering habits, such as smoking and drinking, or through compulsive behavior such as workaholism and perfectionism.

Laboratory experiments have shown that even subtle forms of anger impair problem-solving abilities and general performance competence. In addition to increasing error rates, anger narrows and makes rigid mental focus, tending to obscure alternative perspectives. The angry person has one “right way” of doing things, which, if selected in anger, is seldom the best way. There is nothing you can do angry (resentful, irritable, grouchy, impatient, chilly) that you can’t do better not angry.

Because it acts on the entire central nervous system as an amphetamine, anger always produces a physiological “crash,” often experienced as depression when the issues causing the anger remain unresolved. Think about it. The last time you got really angry, you got really depressed afterwards. The angrier you get, the more depressed you get. And that is merely the physiological response, even if you keep from doing something while angry that you’re ashamed of, like hurting the feelings of someone you love.

What is an Anger Problem?

A dangerous myth about an “anger-problem” restricts its definition to aggression, abuse, hurting people, or destroying property. But this describes only one of a great many forms of anger. You have an anger problem if some subtle form of anger – that you may not even be aware of – makes you do what is not in your best interest or keeps you from performing at your highest potential. This could mean something subtle, like putting a chilly wall between you and others or a continual impatience or low frustration tolerance that interferes with problem solving and performance competence.

Whatever the form of anger, in persistence you run the risk of becoming a reactaholic, with your thoughts, feelings, and behavior totally controlled by whoever or whatever you’re reacting to. The more reactive you are, the more powerless you feel; anger is ultimately a cry of powerlessness.

Mastery of the three steps of self-compassion and compassion for others makes us virtually immune to the ill-effects of anger. The first step of self-compassion is seeing beneath the symptom or defense (anger, anxiety, manipulation, obnoxious behavior) to the cause, which is some form of core hurt (feeling unimportant, disregarded, accused, devalued, guilty, untrustworthy, rejected, powerless, unlovable). Second, the core hurt must be validated (this is how I feel at this moment), and, third, changed (this behavior or event or disappointment or mistake does not mean that I’m unimportant, not valuable or lovable.) Compassion for others is recognizing that their symptoms, defenses, and obnoxious behavior come from a core hurt, validating it, and supporting them while they change it. Compassion does not excuse obnoxious behavior. Rather, it keeps us from attacking the already wounded person, which allows focus on changing the undesired behavior.

Regulation of anger means healing the hurt that causes it by internally restoring the core personal value that seems diminished by the behavior of another. In contrast, anger management requires enduring the hurt that causes the anger but redirecting its effects to avoid aggression and trouble. Anger regulation employs the principles of emotional intelligence: awareness of internal experience, the ability to control the meaning of one’s emotional experience, and empathy for the emotional experience of others. An excellent regulation technique, called HEALSTM, obviates the powerlessness of anger by providing the sense of internal power, well-being, self-compassion, and compassion for others necessary for optimal health and problem-solving. HEALSTM is a technology that, with practice, automatically invokes a response of self-compassion and compassion for others whenever anger and other symptoms and defenses are stimulated, keeping the focus on solutions to the problem, rather than attacking the person. More than 90% effective in lowering anger to problem-solving and performance-efficient levels, HEALSTM can be learned in three or less sessions of training.

Anger at Your Children: Who Has the Power?

Every parent since the beginning of time has been painfully aware that children can do a great many things to irritate, frustrate, and otherwise turn the pleasant feelings of their caretakers into moods from hell. Those same creatures who look like little darlings when they sleep can almost at their whim produce headaches, upset stomachs, jangled nerves, strained muscles, aching bones, and overloaded emotional and sensory circuits.

But there’s one thing that even the most exuberant or obstinate of children cannot do: They can’t make us angry. They cannot force us to give up internal regulation of our emotional experience. To understand this scientific fact that seems to fly in the face of common sense, consider the psychobiological function of anger.

Why Anger is a Problem in Families

An automatic response triggered whenever we feel threatened, anger is the most powerful of all emotional experience. The only emotion that activates every muscle group and organ of the body, anger exists to mobilize the instinctual fight or flight response meant to protect us from predators. Of course, our children are not predators. For the vast majority of problems in family life, anger constitutes overkill and under-think. Applying this survival-level fight or flight response to everyday problems of family living is like using a rock to turn off a lamp or a tank to repair a computer.

Is anyone really stupid enough to turn off a lamp with a rock? When angry, everybody is that stupid. The problem has nothing to do with intelligence, it has to do with how hurt we are. Anger is always a reaction to hurt. It can be physical pain, which is why, when you bang your thumb with a hammer while trying to hang a picture, you don’t pray.

Far more often, though, anger is a reaction to psychological hurt or threat of hurt, in the form of a diminished sense of self. Vulnerability to psychological hurt depends entirely on how you feel about yourself. When your sense of self is weak or disorganized, anything can make you irritable or angry. When it’s solid and well-integrated, the insults and frustrations of life just roll off your back.
For instance, if you’ve had a bad day, if you’re feeling guilty, a little bit like a failure, or just disregarded, devalued, or irritable, you might come home to find your kid’s shoes in the middle of the floor and respond with: “That lazy, selfish, inconsiderate, little brat!” Yet you can come home after a great day of feeling fine about yourself, see the same shoes in the middle of the floor and think, “Oh, that’s just Jimmy or Sally,” and not think twice about it.

The difference in your reaction to the child’s behavior lies entirely within you and depends completely on how you feel about yourself. In the first case the child’s behavior seems to diminish your sense of self: “If he cared about me, he wouldn’t do this; if my own kid doesn’t care about me, I must not be worth caring about.” The anger is to punish the child for your diminished sense of self. In the second instance, the child’s behavior does not diminish your sense of personal importance, value, power, and lovability. So there is no need for anger. You don’t need a tank to solve the problem of the shoes in the middle of the floor. Rather, the problem to be solved is how to teach the child to be more considerate in his behavior; you won’t do that by humiliating him because you feel humiliated. His reaction to humiliation will be the same as yours: an inability see the other person’s perspective, an overwhelming urge to blame, and an impulse for revenge or punishment.

Although their intellectual maturity is far less advanced than that of their parents, children experience anger for the same reasons as adults, mostly to defend the sense of self from pain and temporary diminishment. At the moment of anger, both children and adults feel bad about themselves. Making angry people feel worse about themselves will only make things worse. Rather, children must learn from their parents that the sense of self is internal and can be regulated only within themselves. They must restore their own sense of core value while respecting the rights of other people, which means regulating the impulse for revenge through validation of the hurt causing the urge for revenge, and through understanding the perspective of the person at whom the anger is directed. They will only learn to do this by watching their parents do it.

Mastery of the three steps of self-compassion and compassion for others makes us virtually immune to the ill-effects of anger. The first step of self-compassion is seeing beneath the symptom or defense (anger, anxiety, manipulation, obnoxious behavior) to the cause, which is some form of core hurt (feeling unimportant, disregarded, accused, devalued, guilty, untrustworthy, rejected, powerless, unlovable). Second, the core hurt must be validated (this is how I feel at this moment), and, third, changed (this behavior or event or disappointment or mistake does not mean that I’m unimportant, not valuable or lovable.) Compassion for others is recognizing that their symptoms, defenses, and obnoxious behavior come from a core hurt, validating it, and supporting them while they change it. Compassion does not excuse obnoxious behavior. Rather, it keeps us from attacking the already wounded person, which allows focus on changing the undesired behavior.

Here are a few of the common activators of anger, which we call core hurts: feeling disregarded, unimportant, accused, guilty, untrustworthy, devalued, rejected, powerless, unworthy of love. Once activated, core hurts put the sense of self at stake in solving the problem, which greatly distorts thinking, blows the problem out of proportion, and increases the emotional intensity of the response. Of course the child is responsible only for his/her behavior, not your sense of self.

To regulate anger, we must reduce the sensitivity of these activators. We must learn to view anger as a signal, not to assign blame to our children for tripping the activator, but to look within the self to reset the activated core hurt, i.e., to restore Core Value, a sense of personal adequacy and worthiness. With the sense of self no longer at stake, the problem, no longer a source of self-diminishment, can be solved for what it is: a call for more attention/effort, an inconvenience, disappointment, or mistake.

Emotional regulation skills can be learned fairly quickly in three concentrated learning sessions, with consistent practice between sessions. But whether learned through training or through personal experience that internally regulates anger activators, successful parenting, personal happiness, optimal work efficiency, physical and psychological health, and the capacity to sustain viable attachment relationships demands self-regulation of the impulse to anger and resentment.