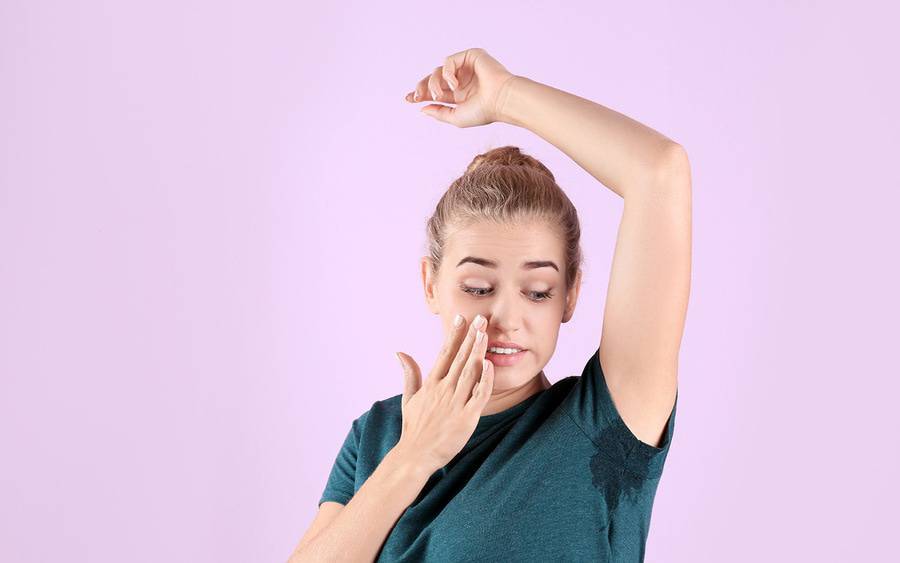 Underarm sweating is also known as axillary hyperhidrosis in medical terminology and is a medical condition, which is described as a condition involving dripping of sweat in the armpits, with a constant odor. This odor is usually resistant to all types of deodorants. Underarm sweating is a type of primary hyperhidrosis, which can be present in a person in singular form, or may be in conjunction with any or all other types of hyperhidrosis—this may include hands, feet, and face as affected areas.

Underarm sweating is one of the most troublesome forms of hyperhidrosis, as it produces odor, which makes working in a social sector a real task for the patients. It is believed that the sympathetic nervous system of the person over-stimulates the sweat glands, which cause underarm sweating. Though, almost all people have underarm sweating while doing some heavy physical work and exercise, but axillary hyperhidrosis occurs even in normal conditions. However, under stress and anxiety, this condition may increase considerably.

The problem of underarm sweating generally begins in the adolescence years; however, there are reported cases of children suffering from this problem. The severity of the problem increases in children, as they spend much of their time with friends in schools, playgrounds, and other areas. Their friends tease them and crack taunts, which can hurt the feeling of a child and can make a permanent impression on his or her mind—this may further lead to withdrawal effects and social phobias in the later stages of the life. Proper attention should be taken by parents in order to make their children come out of this problem and not have social insecurity about their future, which can hamper the overall personality of the child. Usually parents tend to deny this sort of thing, and sometimes they refer it to as a cosmetic problem, when actually this is a medical problem and should be dealt accordingly.

It is an irony of the fact that underarm sweating poses more social problems than the medical problems for the person suffering from it. People suffering from underarm sweating face severe social and psychological problems while interacting with people and working in conditions where many people are working in closed conditions. Sometimes the effect of these problems overwhelms the person completely and it becomes extremely hard for the person to fit in its own environment. The career plans also suffer, as the person is short of confidence and faces self-esteem problems. However, psychological advice and counseling can help greatly in order to bring out the person from this mental trauma.

Players and persons who work in factories and manufacturing companies will also have to look for some treatments and other alternatives in order to keep themselves focused in the work.

Underarm sweating cause great embarrassment due to soaked clothing. Some patients use various strategies in order to keep their underarm sweat under control like using pads, shields, absorbent tissues, and frequent clothing changes, which helps in minimizing the severity of the odor arising of sweat, and thus allowing to work comfortably. It is noticed that many people suffer emotional anxiety due to this problem apart from the occupational problems that they have to face.

The choice of clothes gets reduced for a person who has excessive underarm sweating. Silk and nylon are not preferred for sweat and light colors are also avoided. This leaves fewer choices and also increases the effort that you will have to put in selecting your clothes. Women feel this problem, as silk is one of the most wanted fabric among women!

Hyperhidrosis and excessive sweating in general is believed to be a hereditary problem and proper diagnosis of this problem is pretty much necessary to reduce the impact of this problem. As it is known that sweating is necessary for human body, the approach to diagnosis for underarm sweating starts with the assessment of the excessiveness of the sweat amount. There are different methods for assessment of severity of sweating, which are known as practical, qualitative, and quantitative methods.

During the evaluation of a patient with underarm sweating, it is sometimes necessary to assess the rate of sweat production and the effects of the problem on the patient’s quality of life. The problems faced by the person and the impairment of abilities due to underarm sweating also serve as a valuable guide for proper diagnosis of this problem. In general cases, a sweat stain around the shoulders of around 5 cm in diameter is believed to be normal, but it is falls in 5-10 cm, then mild axillary hyperhidrosis can be expected. Sweat stains of 10-20 cm are associated with moderate axillary hyperhidrosis, while stains over 20 cm are related to severe form of axillary hyperhidrosis.

The quantitative method to diagnose underarm sweating is known as gravimetric measurement, which can also be done on the palm. However, it is more limited to clinical measurements and may not be used in general diagnosis.

Antiperspirants are used for paltry treatment of underarm sweating, which is not a comprehensive treatment and have few results. Some other medications are also prescribed, but they still have not complete impact on the problem. Surgical treatments are looked upon as the complete solutions, but very obviously, like any other surgical treatments, they are associated with multiple side effects—sometimes more severe than the original problem itself!

Compensatory sweating is one of the most common side effects of surgical treatment for underarm sweating, while scars and slow healing of wounds are also associated with it. After going surgical treatment for underarm sweating, other parts of the body start sweating. This sometimes also includes night hyperhidrosis or sleep hyperhidrosis, which involves excessive sweating during night or sleep—the person wakes up totally drenched in the sweat! Sometimes other microbial problems and skin problems also arise due to scars and slow healing of wounds. In some cases it is also noticed that scars sometimes reappear after once fading after the surgery, which is annoying for the patient, who has already suffered much!

Surgical treatments are, clearly, not a panacea for underarm sweating or any types of hyperhidrosis.