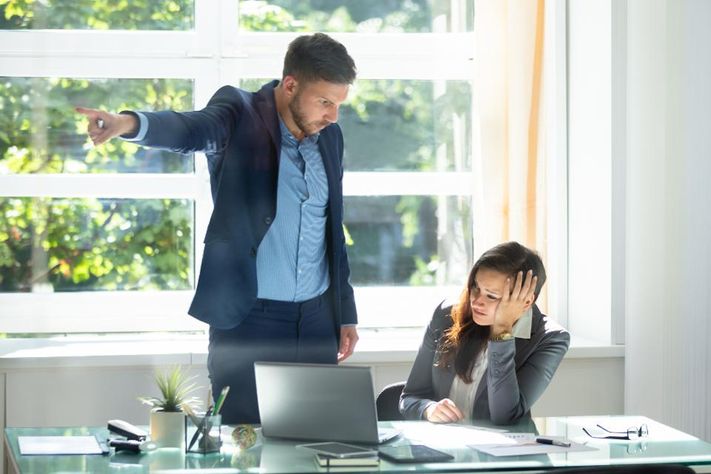 Workplace Bullying: The War of the Nerves

I was with the company for 5 years and was already occupying a supervisory position. But then came the new manager with whom I did not see “eye to eye.” I just couldn’t take it anymore since we didn’t share the same views on workplace policies. He didn’t say it much but somehow he always made it a point to show that he disliked. He often ignores me or gives a sneer when I suggest something to improve our department. Worse… some of my colleagues are now being influenced by this new manager. They are now imitating his bullying.” — David.

David is a classic example of a victim of workplace bullying. No wonder, David often experiences anxiety and panic attacks. According to research conducted by the The Workplace Bullying Institute, workplace bullying is now among the causes of poor employee retention, resignation, and other organizational problems. A third of the human-resource executives surveyed said that they had personally witnessed or experienced workplace bullying.

“Bullying” is also known as “mobbing” — or a frequent and systematic form of harassment. So-called school based bullying occurs when a child torments, taunts or intimidates another child in school. The workplace version may be looked at as en extension of that form of harassment into the world of adults in the office. In the workplace, bullying comes in the form of criticism, teasing and even sarcasm directed an another employee. Harassment in the workplace ranges from antagonism and up to extreme acts that could even lead to physical injuries. The target is subjected to character assassination, aggressive behavior, verbal abuse, and the cold-shoulder treatment. Some are deliberately singled out to do unpleasant or hard tasks. Colleagues may even try to sabotage the victims’ work, hampering his or her productivity — even going so far as hacking the victims’ office computer.

The common stereotype of a bullied person is someone who is a loner or weak in character. However, there are cases when the one being bullied is a capable staff member and may even be well- liked by co-workers. The bully considers their capability a threat and, therefore, is determined to make that person’s work life miserable or so hard that the victim no longer poses as a threat to the bully’s career.

Effects of this harassment can cause victims to suffer from stress, anxiety, and serious health problems. Absenteeism from work is one clear sign of a stress-related illness. Sleeping disorders, depression, and anxiety panic attacks are the most well-known consequences of harassment. The effects of harassment goes beyond the workplace as it also affects the victim’s marriage or personal life.

A bully can contaminate a workplace environment by causing fear, anger, and low morale. About 80% of bullies are bosses. Some co-workers and a few higher-ups can also engage in bullying tactics. A bully can either be a man or a woman. Bullying affects productivity and, as a result, the bottom line of a company. On the other hand, bullying can also be a source of problems for management especially when victims file law suits and compensation claims due to work-related stress.

To address bullying, there must be clear and strict workplace policies in order to stop or prevent this form of workplace harassment. Employers must conduct risk assessments and implement guidelines and stress management programs. With better decision-making processes and policies, the employer can prevent a potential “war zone” in the company. This will take efforts that may entail the conduct of investigations and conflict resolution to prevent the escalation of a problem between employees.

If you find you are being bullied at work- or if you witness someone else that is, be sure to talk to your HR rep or a manager, no one should feel bullied especially at work.