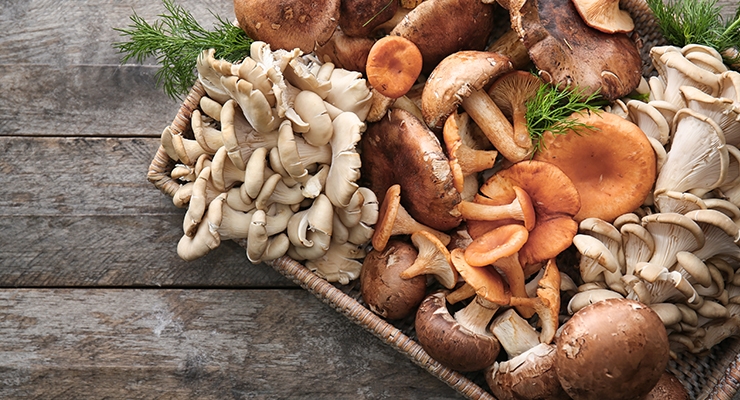 The Benefits of Mushrooms for Your Health

Mushrooms are valuable health food – low in calories, high in vegetable proteins, chitin, iron, zinc, fiber, essential amino acids, vitamins & minerals. Mushrooms also have a long history of use in Traditional Chinese Medicine. Their legendary effects on promoting good health and vitality and increasing your body’s adaptive abilities have been supported by recent studies. These studies suggest that Mushrooms are probiotic – they help our body strengthen itself and fight off illness by maintaining physiological homeostasis – restoring our bodies balance and natural resistance to disease.

Agaricus Mushroom
Agaricus is the most widely consumed mushroom in many countries, where it is regarded as a health food, due to its medicinal properties. Agaricus is traditionally known as “God’s Mushroom” because of its near miraculous curative benefits to a wide range of disorders. People have used it to overcome numerous diseases and disorders relating to the immune system, cardiovascular system, digestion, and for weight management, diabetes, chronic and acute allergies, cataracts, hearing difficulties, stress syndrome, chronic fatigue, diarrhea, constipation, and disorders of the liver.

Cordyceps Mushroom
Cordyceps can be a powerful stimulant for macrophage activity, strengthening your immune system’s ability to fight against bacterial and viral infection. Human clinical studies indicate that Cordyceps can be effective for treatment of high cholesterol, poor libido/impotence, arrhythmia, lung cancer, and chronic kidney failure. It is also reported that Cordyceps causes smooth muscle relaxation. This can make it especially helpful for treating chronic coughs, asthma, and other bronchial conditions.

Maitake Mushroom
Maitake is also known by the name Dancing Mushroom, famous for its taste and health benefits. In Japan, Maitake Mushroom is called “King of Mushroom”. The fruiting body and the mycelium of Maitake are used medicinally. In China and Japan, Maitake Mushrooms have been consumed for 3000 years. Years ago in Japan, the Maitake had monetary value and was worth its weight in silver. Historically, Maitake has been used as a tonic and adaptogen. It was used as a food to help promote wellness and vitality. Traditionally, consumption of the mushroom was thought to prevent high blood pressure and cancer – two applications that have been the focal point of modern research. Clinical research with Maitake Mushroom has increased dramatically in the past several years. Laboratory studies have shown that Maitake Mushroom extract can inhibit the growth of tumors and stimulate the immune system of cancerous mice.

Reishi Mushroom
Reishi has been called an “immune potentiator.” Recent studies have indicated that Reishi can have a number of other effects: Analgesic, Anti-inflammatory, Antioxidant, Antiviral through inducing interferon production, Lowers blood pressure, Cardiotonic action through lowering serum cholesterol, Expectorant & Antitussive, Liver (Hepatitis)-protecting and detoxifying, protection against ionizing radiation, Antibacterial, and Anti-HIV activity. Reishi contains calcium, iron and phosphorus as well as vitamins C, D, and B – including pantothenic acid, which is essential to nerve function and the adrenal glands.

Shiitake Mushroom
Shiitake (for centuries called “Elixir of Life” ) has been licensed as a anti-cancer drug by the Japanese FDA. Lentinan has shown some effect on bowel cancer, liver cancer, stomach cancer, ovarian cancer and lung cancer. Lentinan stimulates the production of T lymphocytes and natural killer cells and can potentiate the effect of AZT in the anti-viral treatment of A.I.D.S. Shiitake is rich in several anti-oxidants (Selenium, Uric acid & Vitamin A, E, & C) as well as Vitamin D. Shiitake mushrooms may also lower blood pressure in those with hypertension, lower serum cholesterol levels, increase libido, stimulate the production of Interferon which has anti-viral effects, and has proven effective against Hepatitis in some cases.

Yun Zhi Mushroom
Yun Zhi, or the Cloud Mushroom, has been used to dispel dampness, reduce phlegm, treat pulmonary infections, to strengthen the tendons and bones, for vital energy, and to support liver health.