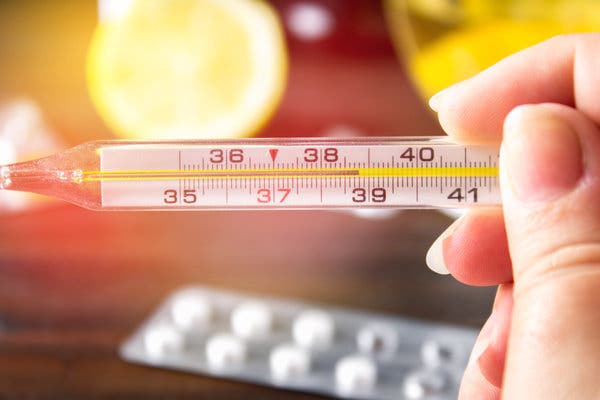 Should You Fight A Fever?

Most people would worry if their temperature, or the temperature of their child or other loved one, was to rise by more than a couple of degrees and they would probably act to try to reduce the temperature to nearer the normal 37C/98.6F. Surprisingly, this is not necessarily the best course of action.

Prior to the development of antibiotics and vaccines, fever struck fear into populations and caused many deaths. Modern medicines, however, have caused these diseases to be treatable or preventable. Medical research has also shown that a fever is not the body’s enemy.

Most bacteria and viruses that cause infections thrive at normal body temperatures. So raising the temperature by a few degrees is the body’s way of fighting infection by making conditions less suitable for the survival and reproduction of the infectious agent. A fever will also activate the body’s immune system by encouraging the production of white blood cells, antibodies and other infection-fighting agents. So if acting to bring down the temperature may prevent the body from fighting the infection, does this mean you should let the fever take its natural course? Not necessarily.

A high fever may be caused by measles, mumps or meningitis or other serious illnesses and you should seek medical help in any of the following circumstances.

Diagnosis
Simple and straightforward: place a hand on the forehead or use a thermometer – there are three types, oral, rectal or a strip that can be placed on the forehead.

Treatment
As a fever is an important part of the body’s defense mechanism, the aim should be to reduce the temperature to about 38C/101F rather than bring it down to normal. Indeed, if a child with a fever is playing happily, is able to sleep, and is taking plenty of fluids, it would be better to let the body’s defenses fight the infection. Conversely, if the child is vomiting, dehydrated, or having difficulty sleeping, seek medical help.

Complications
High fever can cause complications, some of which are serious.
A prolonged period with a temperature above 42C/107.6F can result in brain damage.
In rare cases, high fever can cause febrile seizures. Although the symptoms are alarming, febrile seizures are over in moments and have no lasting consequences. The seizures begin with a sudden contraction of the muscles in the face, arms, legs and trunk. Usually the child will emit a haunting, involuntary moan lasting for perhaps 30 seconds. The child will often fall, vomit, pass urine, cease breathing and might turn blue. Eventually the contraction will be broken by repeated jerks after which the child will be limp, unresponsive and drowsy.

A high fever is a sign that the body is fighting an infection. You should look for other symptoms in order to decide whether to seek medical help.