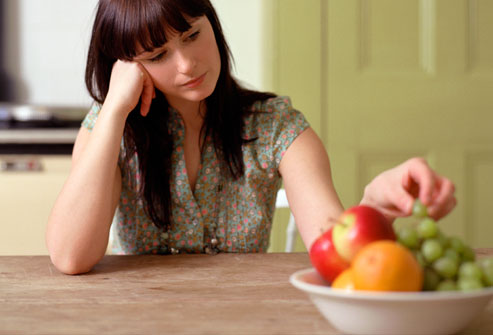 Eating (Or Not Eating) Your Way Of The Blues

Everybody loves food! Maybe except if you’re anorexic or in such a depressed state that you can hardly grab a single bite. But in most cases, the mere thought of food is enough to make the digestive juices run and set-us off on a mouth-watering frenzy for the good stuff — ice cream, cake, and other sweet and often fatty delights.

But what often goes unnoticed is that food is also one of the leading causes of depression. How did that happen? Well, aside from starvation which can certainly make anyone weak and bleak, certain foods can also cause the blues. First, excessive eating actually makes our digestive system to become overworked. Like everything else in the universe, human capacity for food digestion is limited. Heavy eating right before sleeping actually only provides a temporary full feeling after burning the midnight oil in the office. But more often than not, a person who overeats at night still feels tired the next morning because his digestive system had to work overtime long after then rest of the body goes to sleep.

But the more conventional or usual cause of anxiety might involve a lingering illness, work problems, or a relationship gone sour. Enormous pressure at the office or unusually high demands in school can cause an otherwise stable individual to slowly “lose a grip” on life. Anxiety leaves a person listless, worried, hassled, and totally stressed out. Persons with severe emotional or psychological problems find themselves unable to focus at work or maintain smooth relations with a loved one or a friend.

To put a balance to it, anxiety can sometimes do good. Athletes and performers say that the “butterflies” they feel before competition or right before they go out on stage is a good sign. The twirling, swirling feeling in their gut is actually caused by the release of extra adrenaline. The anxiety actually helps the athletes and performers get mentally, emotionally, and biochemically primed for action.

Still, some people unintentionally throw themselves into a funk because of what they eat, or, what they don’t eat. For this reason, a lot of nutritionist-dietitians and health professionals promote what is called an anxiety diet. The concept behind this diet can be compared to the clich· “You are what you eat.” Eat what isn’t good for you, then don’t expect to feel good. Eat what is right, then, at least, you can have a source of hope that physically, emotionally and mentally — you may be able to feel right, too.

If you consult a food guru or read a nutrition guide, you will probably find a host of menus and eating suggestions that promise improved health and a happier disposition. But for the meantime, you may want to try the following suggestions that are normally found part of every anxiety diet that is being promoted nowadays:

Coffee intake must be moderate to avoid the possible “downer” effects of caffeine. Yes, caffeine is supposed to be an “upper”, something we take during breakfast to give us that all-essential “morning pep.” It is a central nervous system stimulant that helps decrease drowsiness. Coffee is actually the world’s most used psychoactive drug. A cup of coffee will take effect in less than an hour and its “high” normally wears of in a couple of hours, depending on the strength of the brew or number of milligrams of caffeine consumed. But over consumption of coffee can lead to sleep deprivation, which of course, leaves one with less energy and concentration the next day. Heavy consumption of coffee also leads to tolerance, making one consume more coffee over time. Once taken out of the system, a person may experience what is known as “withdrawal.” Coffee withdrawal symptoms include irritability, headaches, stomach upset, and the inability to concentrate.

Like coffee, alcohol intake must also be done moderately. Aside from the obvious adverse effects on judgment and body coordination, excessive alcohol intake is habit forming. Alcoholism is associated with a host of ailments including hepatitis, cirrhosis of the liver, high blood pressure, and gastritis. At first, alcohol intake may actually relieve anxiety because it tends to dull one’s senses and decrease inhibitions. But in the long term, alcohol abuse certainly leads to anxiety, depression, mood swings, and sleeping problems.

Taken at moderate amounts, the world’s favorite “comfort food” can actually produce that “in-love” feeling, and hopefully decrease depression. Chocolate consumption is associated with the increase of serotonin in the body. Serotonin is a substance produced in the body that gives a “pleasure” effect. Eating chocolate also increases brain activity and heart rate. Aside from being an anti-oxidant, chocolate can actually help improve one’s disposition because it helps in the increased production of dopamine, which acts as a naturally occurring opiate.

Eating breakfast regularly is a simple yet often ignored tip to preventing depression. Going to work to face the daily pressure of beating deadlines, on an empty stomach, could spell trouble. Sustained hunger can also lead to the lowering of blood sugar levels, loss of concentration, weakened physical capabilities, and of course, depression.

Keeping sugar levels down is also important. While sugar can do wonders when taken in the proper amounts, as seen in the eating of chocolate, too much of the substance in the body may cause high a general feeling of weakness, high blood pressure, kidney and heart problems, blurred vision, and may worsen other illnesses such as diabetes. Since excessive sugar intake is a health risk, it can also lead to anxiety and depression.

For those with serious cases of nervousness, apprehension, and fear, otherwise known as high anxiety, the intervention of a doctor or health professional may be required. Once properly diagnosed, a person suffering from these emotional woes may be given anti-anxiety pills that would help control the symptoms of the “deep blues.”

But for those with mild emotional disturbances, a quick change in lifestyle coupled with a sensible and professionally approved anxiety diet — beating the blues may no longer be as hard as it used to be.