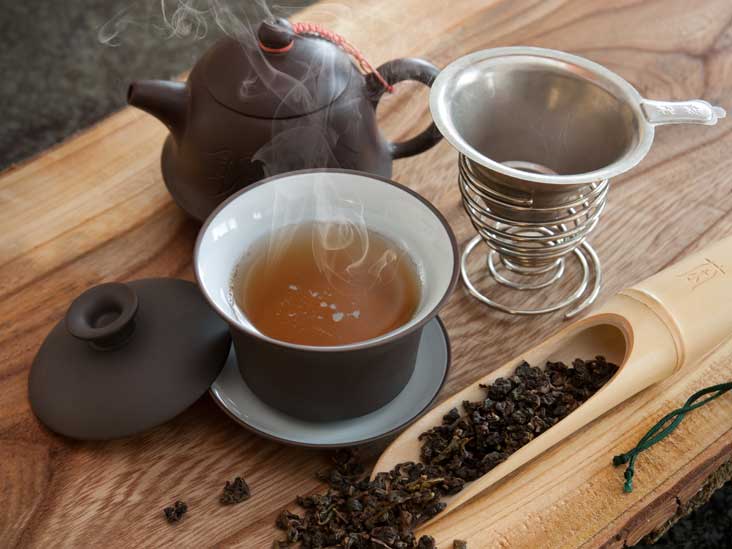 The Health Benefits Of Oolong Tea

Oolong tea has a long and rich history that includes being one of the plants that were grown and prized by ancient Chinese emperors and today is prized for its many known health benefits around the world. The history of the plant that is botanically known as Camellia sinensis has been used throughout history for good health, healing and averting illness. These tea leaves generally originate from the Fuijan Province of China or the mountains of Taiwan and can also be referred to as Wu-Long tea. There is some evidence that the tea leaves from this region have a history of at least four hundred years; arriving toward the end of the Ming Dynasty.

This tea now known for ensuring many different health benefits can be found as straight oolong tea or with other enhancements such as jasmine, orange blossoms and others.

The process of manufacturing the tea is done with utmost care and in a fashion that has transcended the ages; from the time it is picked until the time it is packaged it undergoes a careful hand process. After the leaves are picked they are laid out to dry for a short amount of time where the oxidation process begins. Then the leaves are placed in baskets and shaken in order to bruise them. This exposes the juice of the leaves to the air whereby the oxidation process continues after which the leaves are laid out to dry for a second time. This process will oxidize the leaves from 20-80%, depending on the type of final product desired. The leaves will then be fired to halt the oxidation. Then they are sometimes rolled while still freshly roasted and fired several more times. As a way of finishing the process the leaves are completely cooled and then fired a final time to give the oolong tea the special flavor while reserving the healthful properties of the leaves.

Tea of all types have been under the microscope of late, and oolong tea has been studied and found to have numerous antioxidants, vitamins and minerals along with polyphenols, which all fit into a healthful regiment. Polyphenols that are found in oolong tea have the ability to remove free radicals, which are known for prematurely aging the skin along with causing the dark spots associated with aging. Free radicals have also been associated with hindering the immune system and they are also associated with cancer cells as well as muscle tissue deterioration or damage.

Oolong tea is also known for enhancing the function of enzymes, which in turn are known to dissolve triglycerides. These are the fatty deposits in the body and therefore it can aid in a weight loss regiment. There have been clinical trials done and it was found that this type of tea can raise the metabolic rate, which speeds up fat oxidation and the catechin polyphenols raise the rate that calories are burned in the body. This in turn means that oolong tea has the compounds in it to aid directly in weight loss. It is also an aid in reducing blood pressure that will in turn help to prevent hypertension; this is because of its ability to use the fatty deposits in the body as fuel for energy.

There is also possible evidence that along with the caffeine there is also an increase in stamina, which can help in an exercise regiment. Caffeine is also known to stimulate the frontal cortex of the brain; this helps in memory function and enhances the thought process.

There are other health benefits that have long been believed by Chinese herbalists such as the properties in oolong tea to reduce tooth decay and to aid in speeding oral healing because of tannic acid that is present in the tea. They also believe oolong tea assists in aiding the kidneys, as well as improving the utilization of glucose, which in turn aids the regulation of insulin.

Research and studies have shown that the Chinese who are known for their consumption of drinking have significant lower incidences of heart disease and prostate cancer than other ethnic groups. There is also scientific evidence that tea can also be an aid in breast cancer treatment, when used along with tamoxifen.

A recent study of Japanese elderly demonstrated that those who consumed two cups of tea per day had a lower chance of cognitive impairment by approximately fifty percent. Other studies have pointed to tea’s positive impact on the onset of Alzheimer’s.

While there is evidence that oolong tea and tea in general can benefit the health of the body there is also the fact that this tea is consumption friendly. Unlike vitamins, pills, health drinks and other health foods and drinks that are supposedly good for promoting health, oolong tea has a taste that is a pleasure to drink – and it is rehydrating, and nourishing.

This is a tea that has the ability to be flavored with different herbs and florals as well as served alone. Alone it can be dark in color with a robust taste that includes a hint of raisin, honeysuckle or almond. It can also be light and floral if only partially oxidized. Flavored oolongs can be found with names and tastes such as ginger peach oolong tea, orange blossom and plum oolong tea and others. Each of these teas has their own unique flavor and some have history behind their name like the Oriental Beauty, which received its name from Queen Elizabeth II. She named the tea after a tea merchant who brought it from Asia. The name is still used today.

So pour a cup and enjoy 🙂