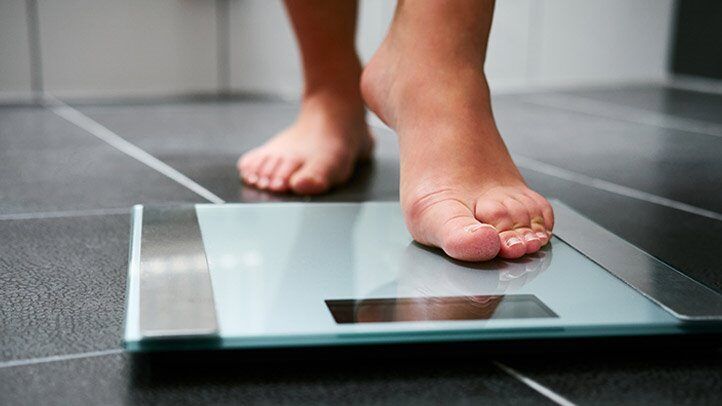 The scale can be like a lousy personal trainer. It can be giving you bad information. In other words, do not become too dependent on this devilish, little device sitting on your bathroom floor.

It happens every morning when you mosey out of bed, somewhere between the time you take off that robe and the instant you step into the shower. For others, it happens immediately after a workout, as soon as you peel off those sweaty clothes and stand aimlessly in your birthday suit.

Then, the big moment arrives. The excitement, the tension, it all forms a giant knot in your throat. This experience is a lot like playing the roulette wheel and you know you have plenty riding on this one. Hence, the numbers that come up can spree a variety of reactions.

You step onto the scale in your bathroom and peek through your fingers at the fate staring back at you.

To some, you jump up and down like you just hit the jackpot. Others shriek as if they’d just crapped out.
Well, the scale is indeed a useful tool to monitor your weight-loss developments. What other method is there to track specifically how much you’ve progressed in your endeavors to lose weight?
Yet, the scale can be like a lousy personal trainer. It can be giving you bad information. In other words, do not become too dependent on this devilish, little device sitting on your bathroom floor. Here are two reasons why:

Scales are not perfect. At any given moment, it can go from being your best friend to your worst enemy. If the scale isn’t tipping your way, it can throw your entire mental state off the mark. Scales can often deceive you into thinking you’re heavier – or lighter – than you actually are. In more case, it’s the latter. And by thinking that you’re that far ahead of the game, the only one you’ll be fooling is yourself.

Instead, try going by how your clothes fit on your body or how you feel internally than relying on some imperfect machine. Take a picture of yourself at the beginning of the month and then at the end of the month to evaluate the progress. Obsession with the scale is not unlike other fixations – it’s certainly not healthy.

Scales tend to dictate. Too many people are consumed with the numbers on the scale. It’s not unlike the scenario of a baseball player who is completely engrossed in his batters’ average. The average is just a number. He should be more concerned with winning the game. The same goes with the battle against weight loss.

The goal should never be a number. If you become too concerned with reaching a specific number, by a certain time, it can lead to starvation, bulimia, malnutrition, many conditions that are not beneficial to your body or you’re health.

Remember, the best scale you can have is your mind. If it’s telling you that the unwanted fat is disappearing from your figure like a dress on prom night, chances are that you’re right.

A low number is not the epitome of health and a high number doesn’t equate to obesity. Everyone’s healthy weight is different. Scales don’t measure fitness, strength, or eating habits. Don’t get attached to what the scale says. It’s just a number 🙂