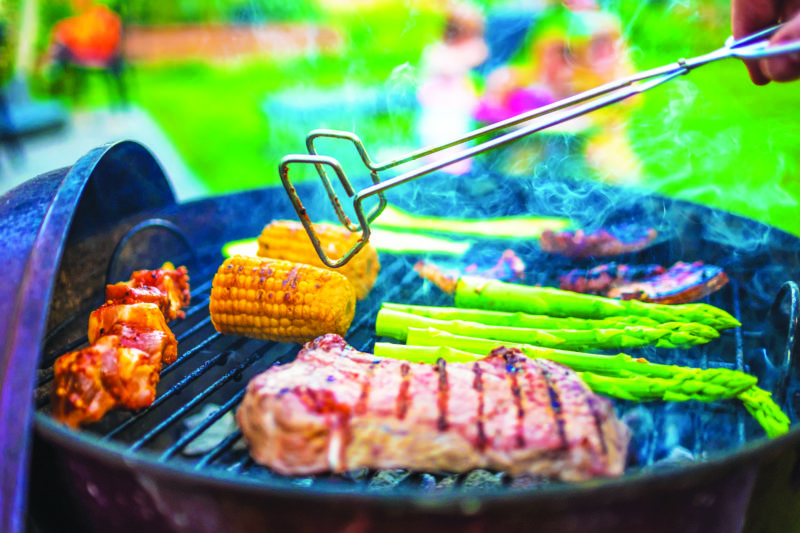 Now that it’s summer, it’s almost impossible to avoid the ever-popular summer BBQ. Some of our favorite meals are cooked over charcoal, but we still need to be aware that many of the traditional ‘summer’ foods are packed with fat and calories!

Isn’t it ironic that some of the ‘fattest’ foods make their debut in the summer when we’re all trying to fit into that bathing suit?

So which traditional summer foods will break the belt?

HOT DOGS. Although they’re small, the typical hot dog contains about 30% of your daily saturated fat intake! At about 180 calories each, hot dogs may seem quite harmless until we realize that 140 of those calories are from FAT. Don’t forget that the average hot dog bun has 110 calories, which boosts the total to 250 calories per hot dog.

HAMBURGERS. Ground beef comes in all sorts of varieties, from ‘full-fat’ to ‘low-fat’. You’ll pay more for the low-fat version, but it’s worth it. The average hamburger has about 275 calories and 12 grams of fat (includes the bun). That’s slightly less fat than the hot dog, but more calories. “The secret to keeping the burger lean is to avoid the high fat toppings such as mayonnaise, bacon, cheese or sauces and instead, garnish simply with ketchup, mustard, tomatoes, onions and relishes” (Source: Ontario Cattlemen’s Association). Pile on the high-calories toppings and you’ll boost the calorie count to 800 or even higher!!

POTATO CHIPS. A summer BBQ just wouldn’t be a BBQ without the chips! But while we’re enjoying the crunch, we’re putting on the pounds. Many brands of potato chips contain about 150 calories per serving. Doesn’t sound like much? Consider that what they call a ‘serving’ is really one ounce…..11 chips. Here’s another way to look at it: each SINGLE potato chip provides a bit more than 1% of your daily recommended fat intake!|

So what’s a summer-BBQ-lovin’ person to do? Relax! There’s no need to avoid the fun this summer! By just making a few creative adjustments to the menu, we can enjoy the family picnic while keeping our diet under control.

Try fruits, veggies and baked beans instead of chips. We all know the health benefits of eating more fruits and vegetables, so focus on those instead of full-fat potato chips. High in fiber and low in calories, these choices will help us feel full without putting on the pounds.

Try a ground turkey patty instead of a hamburger. It will save you more than 100 calories, and it’s really not bad tasting! Be sure to look for SKINLESS ground turkey, which has far fewer calories than just ‘ground turkey’.

Don’t forget about fish! The choices are almost endless, and the health benefits are overwhelming. Put some salmon on the BBQ and enjoy! The American Heart Organization recommends eating fish (particularly fatty fish) at least two times a week. Fish is a good source of protein and doesn’t have the high saturated fat that fatty meat products do.

Finally, watch the drinks. High-calorie beverages like lemonade and Kool-Aid boast between 60 and 100 calories per glass, and sometimes even more. A single can of soda usually contains about 160 calories. Choose low-calorie drinks like iced tea (unsweetened) or just plain old water.

With just a little effort, the summer BBQ doesn’t have to add inches or pounds! Choose healthy, low-fat and low-calorie foods instead of the traditional fare and keep those pounds off!