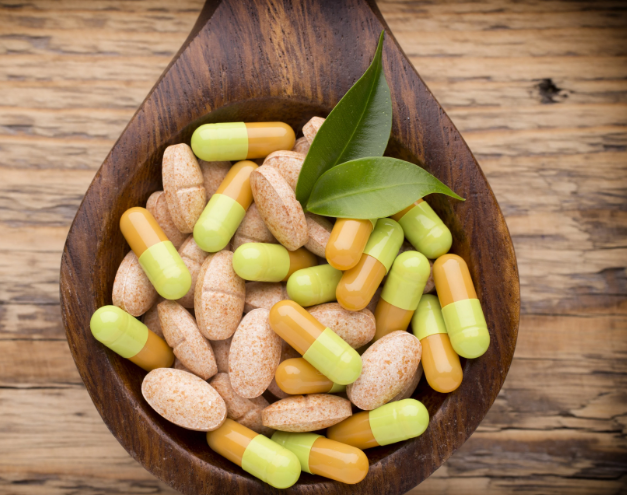 24 Good Reasons Why You May Need Vitamin Supplements

Many people believe that eating a well balanced diet provides all the vitamins and minerals necessary for good health. In ideal circumstances, this is the case, but in reality there are many reasons why you may need vitamin supplements to cope with living in the twentieth century environment. Taking vitamins when required is a safe method of optimizing your dietary sources of nutrients, providing you follow the instructions on product labels.

1. Poor Digestion
Even when your food intake is good, inefficient digestion can limit your body’s uptake of vitamins. Some common causes of inefficient digestion are not chewing well enough and eating too fast. Both of these result in larger than normal food particle size, too large to allow complete action of digestive enzymes. Many people with dentures are unable to chew as efficiently as those with a full set of original teeth.

2. Hot Coffee, Tea and Spices
Habitual drinking of liquids that are too hot, or consuming an excess of irritants such as coffee, tea or pickles and spices can cause inflammation of the digestive linings, resulting in a drop in secretion of digestive fluids and poorer extraction of vitamins and minerals from food.

3. Alcohol
Drinking too much alcohol is known to damage the liver and pancreas which are vital to digestion and metabolism. It can also damage the lining of the intestinal tract and adversely affect the absorption of nutrients, leading to sub-clinical malnutrition. Regular heavy use of alcohol increases the body’s need for the B-group vitamins, particularly thiamine, niacin, pyridoxine, folic acid and vitamins B12, A and C as well as the minerals zinc, magnesium and calcium. Alcohol affects availability, absorption and metabolism of nutrients.

4. Smoking
Smoking too much tobacco is also an irritant to the digestive tract and increases the metabolic requirements of Vitamin C, all else being equal, by at least 30mg per cigarette over and above the typical requirements of a non-smoker. Vitamin C which is normally present in such foods as paw paws, oranges and capsicums, oxidizes rapidly once these fruits are cut, juiced, cooked or stored in direct sunlight or near heat. Vitamin C is important to the immune function.

5. Laxatives
Overuse of laxatives can result in poor absorption of vitamins and minerals from food, by hastening the intestinal transit time. Paraffin and other mineral oils increase losses of fat soluble vitamins A, E and K. Other laxatives used to excess can cause large losses of minerals such as potassium, sodium and magnesium.

6. Fad Diets
Bizarre diets that miss out on whole groups of foods can be seriously lacking in vitamins. Even the popular low fat diets, if taken to an extreme, can be deficient in vitamins A, D and E. Vegetarian diets, which can exclude meat and other animal sources, must be very skillfully planned to avoid vitamin B12 deficiency, which may lead to anemia.

7. Overcooking
Lengthy cooking or reheating of meat and vegetables can oxidize and destroy heat susceptible vitamins such as the B-group, C and E. Boiling vegetables leaches the water soluble vitamins B-group and C as well as many minerals. Light steaming is preferable. Some vitamins, such as vitamin B6 can be destroyed by irradiation from microwaves.

8. Food Processing
Freezing food containing vitamin E can significantly reduce its levels once defrosted. Foods containing vitamin E exposed to heat and air can turn rancid. Many common sources of vitamin E, such as bread and oils are nowadays highly processed, so that the vitamin E content is significantly reduced or missing totally, which increases storage life but can lower nutrient levels. Vitamin E is an antioxidant which defensively inhibits oxidative damage to all tissues. Other vitamin losses from food processing include vitamin B1 and C.

9. Convenience Foods
A diet overly dependent on highly refined carbohydrates, such as sugar, white flour and white rice, places greater demand on additional sources of B-group vitamins to process these carbohydrates. An unbalanced diet contributes to such conditions as irritability, lethargy and sleep disorders.

10. Antibiotics
Some antibiotics although valuable in fighting infection, also kill off friendly bacteria in the gut, which would normally be producing B-group vitamins to be absorbed through the intestinal walls. Such deficiencies can result in a variety of nervous conditions, therefore it may be advisable to supplement with B-group vitamins when on a lengthy course of broad spectrum antibiotics.

11. Food Allergies
The omission of whole food groups from the diet, as in the case of individuals allergic to gluten or lactose, can mean the loss of significant dietary sources of nutrients such as thiamine, riboflavin or calcium.

12. Crop Nutrient Losses
Some agricultural soils are deficient in trace elements. Decades of intensive agriculture can overwork and deplete soils, unless all the soil nutrients, including trace elements, are regularly replaced. This means that food crops can be depleted of nutrients due to poor soil management. In one U.S Government survey, levels of essential minerals in crops were found to have declined by up to 68 per cent over a four year period in the 1970’s.

13. Accidents and Illness
Burns lead to a loss of protein and essential trace nutrients such as vitamins and minerals. Surgery increases the need for zinc, vitamin E and other nutrients involved in the cellular repair mechanism. The repair of broken bones will be retarded by an inadequate supply of calcium and vitamin C and conversely enhanced by a full dietary supply. The challenge of infection places high demand on the nutritional resources of zinc, magnesium and vitamins B5, B6 and zinc.

15. P.M.T
Research has demonstrated that up to 60 per cent of women suffering from symptoms of premenstrual tension, such as headaches, irritability, bloated ness, breast tenderness, lethargy and depression can benefit from supplementation with vitamin B6.

16. Teenagers
Rapid growth spurts such as in the teenage years, particularly in girls, place high demands on nutritional resources to underwrite the accelerated physical, biochemical and emotional development in this age group. Data from the USA Ten State Nutrition Survey (in 1968-70 covering a total of 24,000 families and 86,000 individuals) showed that between 30-50 per cent of adolescents aged 12-16 had dietary intakes below two thirds of the recommended daily averages for Vitamin A, C, calcium and iron.

17. Pregnant Women
Pregnancy creates higher than average demands for nutrients, to ensure healthy growth of the baby and comfortable confinement for the mother. Nutrients which typically require increase during pregnancy are the B-group, especially B1, B2, B3, B6, folic acid and B12, A, D, E and the minerals calcium, iron, magnesium, zinc and phosphorous.

The Ten State Nutrition Survey in the USA in 1968-70 showed that as many as 80 per cent of the pregnant women surveyed had dietary intakes below two thirds of recommended daily allowances. Professional assessment of nutrient requirements during pregnancy should be sought.

18. Oral Contraceptives
Oral Contraceptives can decrease absorption of folic acid and increase the need for vitamin B6, and possibly vitamin C, zinc and riboflavin. Approximately 22 per cent of Australian women aged 15-44 are believed to be on “the pill” at any one time.

19. Light Eaters
Some people eat very sparingly, even without weight reduction goals. US dietary surveys have shown that an average woman maintains her weight on 7560 kilojoules per day, at which level her diet is likely to be low in thiamine, calcium and iron.

20. The Elderly
The aged have been shown to have a low intake of vitamins and minerals, particularly iron, calcium and zinc. Folic acid deficiency is often found, in conjunction with vitamin C deficiency. Fibre intake is often low. Riboflavin (B2) and pyridoxine (B6) deficiencies have also been observed. Possible causes include impaired sense of taste and smell, reduced secretion of digestive enzymes, chronic disease and, maybe, physical impairment.

21. Lack of Sunlight
Invalids, shift workers and people whose exposure to sunlight may be minimal can suffer from insufficient amounts of vitamin D, which is required for calcium metabolism, without which rickets and osteoporosis (bone thinning) has been observed. Ultraviolet light is the stimulus to vitamin D formation in skin. It is blocked by cloud, fog, smog, smoke, ordinary window glass, curtains and clothing. The maximum recommended daily supplement intake of vitamin D is 400 i.u.

22. Bio-Individuality
Wide fluctuations in individual nutrient requirements from the official recommended average vitamin and mineral intakes are common, particularly for those in high physical demand vocations, such as athletics and manual labor, taking into account body weight and physical type. Protein intake influences the need for vitamin B6 and vitamin B1 is linked to kilo joule intake.

23. Low Body Reserves
Although the body is able to store reserves of certain vitamins such as A and E, Canadian autopsy data has shown that up to thirty percent of the population have reserves of vitamin A so low as to be judged “at risk”. Vitamin A is important to healthy skin and mucous membranes (including the sinus and lungs) and eyesight.