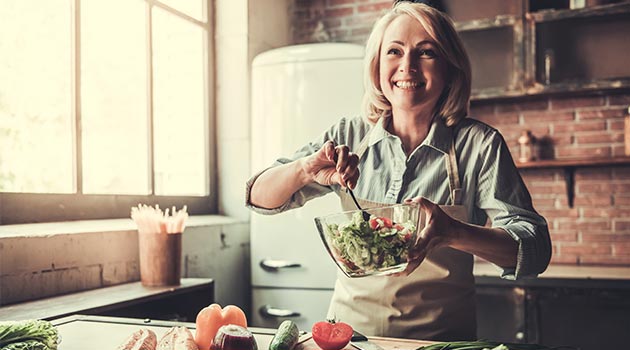 When it comes to Menopause- You Are What You Eat

Did you know that Japanese women tend to suffer hot flashes only about 1/3 as often as American women? Or that those following a vegetarian diet also complain of hot flashes far less than the rest of us? Of course, you don’t have to give up the steaks just yet – but doctors and nutritional professionals suspect that the difference is largely due to the use of soy products in the diets of these women, and several women have now realized that by incorporating some soy in their diets, their symptoms of menopause have abated considerably.

In fact, altering your diet in small ways can have the greatest positive effect on your body as it transitions to menopause and beyond. For instance, by staying away from hot drinks, you’re not giving your body reason to “heat up” and produce a hot flash. At the same time, reducing your caffeine intake (which often comes in the form of hot drinks, including coffee and tea) will naturally help you sleep better at night, which will keep your mood and mental state healthy.

Lastly, replacing these drinks with water and juice will keep your bones and muscles well-lubricated, prevent osteoporosis from settling in, and temper your general aches and pains. We know it’s no easy task to give up coffee, but think of the endless benefits of this one relatively minor change to your diet.
In fact, one of the most commonly complained about symptoms of menopause these days is the weight gain that seems to come along with it. Put simply, your body isn’t burning calories in the same way it once was, so if you don’t change your diet – even if it’s already a healthy one – you’re bound to gain a few pounds around the waist.

Changing your diet now, simply by avoiding a few foods that are bound to make other symptoms worse, while increasing the foods high in certain vitamins while remaining low in calories, will help you to maintain your figure while giving your body the nutrients it needs to fight off some of the worst symptoms of menopause.

We’ll tell you which foods to add to your diet if you’re suffering hot flashes, vaginal thinning, aches and pains, or emotional symptoms of menopause. In addition, of course, we’ll share the secrets of which vitamins and herbs have been proven to keep your mind sharp and your bones strong as you age through menopause and beyond.

For instance, foods high in potassium, including most fruits, will help you keep your mind sharp while promoting healthy water flushing throughout your body (which will reduce cramps and bloating), while keeping your muscles and bones lubricated and strong – including your needy joints and your thinning vaginal walls. In short, this is the time in your life when “an apple a day” couldn’t ring more true!
Also, oily fish, including salmon and tuna, and vegetable oils, are often recommended by nutritionists for anyone wanting to keep their minds sharp. But these oils are also useful in helping keep your muscles from drying, while helping your digestive system.

In fact, everything from Vitamins C and E to herbal remedies such as Dong Quai and Wild Yam Root are discussed in this book; remember, not only American women suffer menopause – you’re far from alone. Every woman in the world goes through menopause sooner or later, and we all have our own ways of treating the symptoms unique to us.

We’ll explore the countless ways in which these small changes or additions to your diet will not only combat the unique symptoms you’re going through, but the ways in which you can identify these symptoms quickly to lead a healthy, long life far after menopause.

But let’s talk about soy again, briefly. It’s been in the news, and for good reason, but where do you start? Many of us would buy a chunk of tofu, which, let’s face it, can be tasteless, but it doesn’t end there, and again, you don’t need to move to Japan to figure out how to add it to your diet. You don’t need to give up eating cheeseburgers to enjoy the occasional veggie burger, but adding some soy to your diet has made the symptoms of menopause much more tolerable for millions of women. If you’ve not eaten many soy products, don’t hold your nose just yet – in addition to helping your symptoms, you may find that you actually like it!